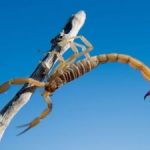 Arizona is known for their scorpions just as much as their cacti. The desert is home for many species of scorpions, primarily Bark Scorpions and Desert Hairy Scorpions.

Scorpion sightings in Arizona are a regular and common occurrence. Arizona has many species of scorpion ranging in sizes, colors, and severity of sting.

The two most prominent that people would see here in the valley are the Bark and Desert Hairy scorpions. The Bark scorpion is definitely the most common and the more harmful of the two.

You will want to take plenty of precautionary measures. Don’t wait until you’ve started to notice an uptick in activity due to living near a mountain or because of a lot of construction in your area.

How to Prevent Scorpions in Your Home

Here’s 1 way to prevent scorpions from getting into your home.

Screening your exhaust fan vents in your bathrooms and laundry room is one of the most crucial things to do in your home for keeping them out. It is one of the most common entry points second only to poorly weatherstripped doors leading to the exterior. The video above shows you how to do that or we offer that service as well!

We also offer a whole home scorpion seal, which isn’t for everybody, but can significantly help with major issues and we do it in a way that maintains your home’s integrity and structure making it inaccessible to the insects but not eliminating the necessary function the structure was designed for.

For scorpion control we have several new options and suggestions for ultimate success.

For example, do you know what the MOST successful control of scorpions is? Have you ever heard of scorpion hunting? Did you know that scorpions are the only insect to fluoresce under a black light? So you go out in the middle of the night with your black light (we recommend the Defiant brand that can be found at The Home Depot or online or from us)  😉   and kill them or collect them any way you wish.

This method will reduce the adult, breeding population around your home, which, in turn, will inherently reduce the number you see in your home and the number that will grow up around you in the future.

Grab the blacklights and let’s go hunting for some scorpions. Of course, if this is not an activity you’d like to take part in, call Green Organics Pest Control and we’ll do the hunting for you.

Do You Have Questions?

Got questions about pest control or how we can service you and your home? Give us a call now. We’d love to help…